An on-line symposium organised by the Eugin-UPF Chair on ”The many faces of becoming a parent” took place on Friday 18 September, in which renowned Spanish and international experts analysed the implications of what parenthood means in the current circumstances, where genetic and biological advances, as well as social changes, are affecting the way in which it is approached. These included the Group’ s medical director, Dr Amelia Rodríguez-Aranda, as well as its scientific director, Dr Rita Vassena. The event brought together more than 150 people online.

Test to identify diseases before pregnancy 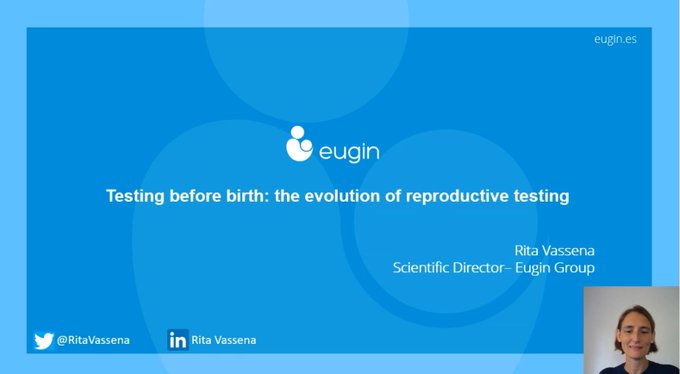 During her presentation, Dr Rita Vassena pointed out that Expanded Carrier Screening (ECS) genetic testing is a form of preventive, as well as inclusive, medicine. Currently, this type of test analyses between 300 and 600 genes and it is estimated that, just by studying only 300 genes, diseases that affect up to one child in 100 taken as a whole can be identified before pregnancy.

ECS tests, which are carried out on each partner using blood or saliva tests, identify mutations in the genes and make it possible to check whether the mutation is in the same gene in both people at the same time. If this is the case, future children could be affected by a recessive disease. More specifically, according to what Dr. Vassena stated in her talk, the probability that future children will be affected by the identified disease is 25%, in other words, if a couple had four children, one of them on average, would suffer from the identified recessive disease.

Thus, using these tests allows healthy people with no previous medical history to detect major hereditary genetic diseases before pregnancy and therefore reduce the risk of their children suffering from them. “The aim of these tests is to ensure that people who want to get pregnant are informed about their situation and the options they have,” Dr Vassena stressed. In the case of assisted reproduction, couples can opt for embryological testing, prenatal diagnosis or gamete donation. 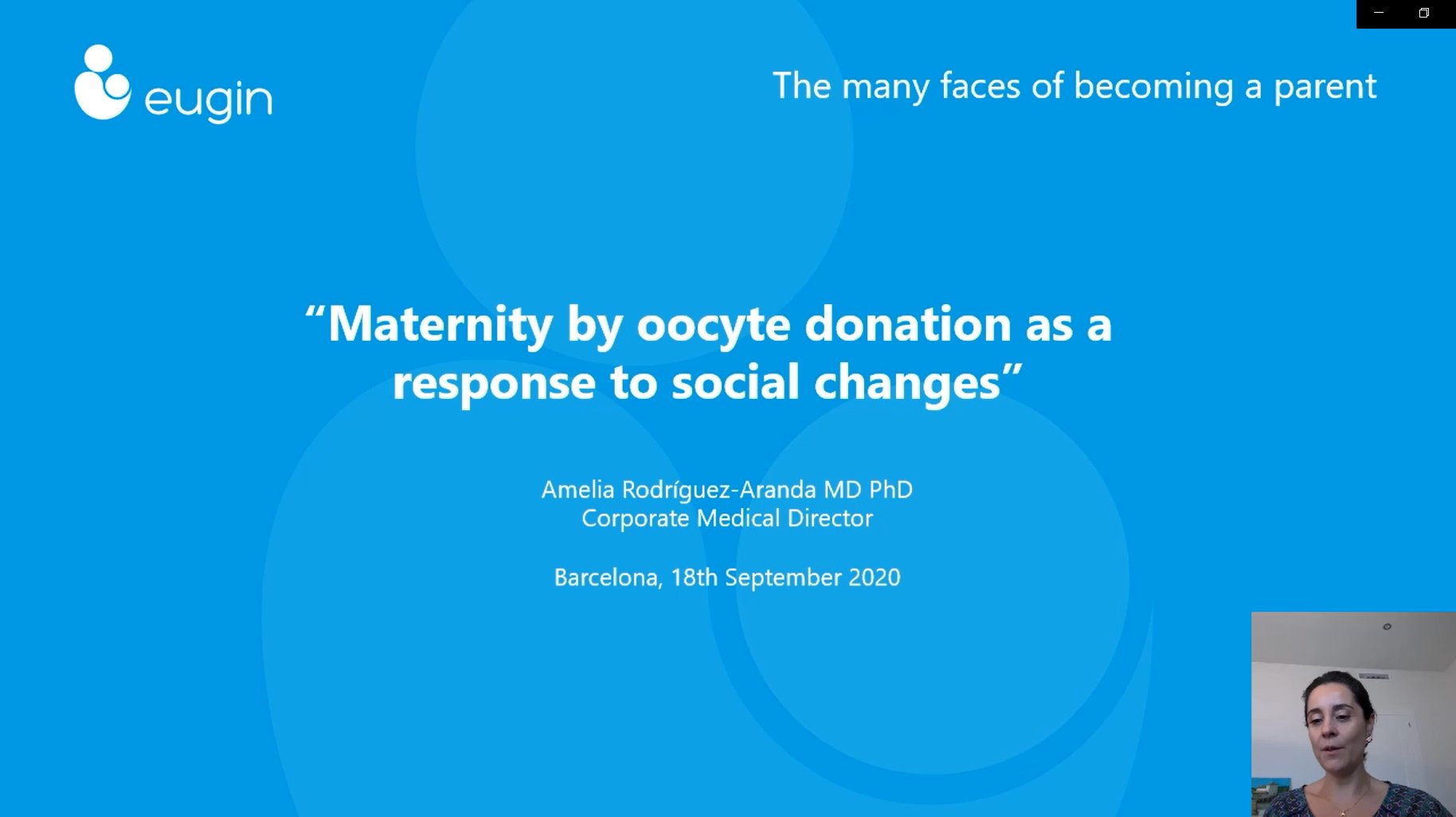 During the conference, Eugin Group’s medical director, Dr Amelia Rodríguez-Aranda, also analysed what it means in reproductive terms for women to have children later in life.

In this regard, Rodríguez-Aranda pointed out that the lack of information about what it means to be older in the reproductive years, together with the current social constraints and the lack of knowledge about this subject among health professionals, as well as the over-confidence generated by assisted reproduction treatments using one’s own oocytes, means that women are increasingly trying to get pregnant later.

Nevertheless, according to Dr. Rodríguez-Aranda, this results in natural or assisted pregnancies using one’s own eggs being compromised at an advanced reproductive age and means that a high percentage of women have to resort to in vitro fertilisation using donor eggs. According to the latest figures from the Spanish Fertility Society (SEF) for 2017, more than 11,000 embryo transfers involving egg donations were recorded in Spain.

During the presentation, Rodríguez-Aranda stressed that in Spain this type of treatment is underpinned by a comprehensive regulatory framework and that moreover, donations are socially well accepted. However, this regulatory and ideological openness cannot be extended to all European countries, so many women and couples, in addition to the above problems, have to face others such as travelling outside their home country to receive treatment, in an attempt to solve their reproductive problem. 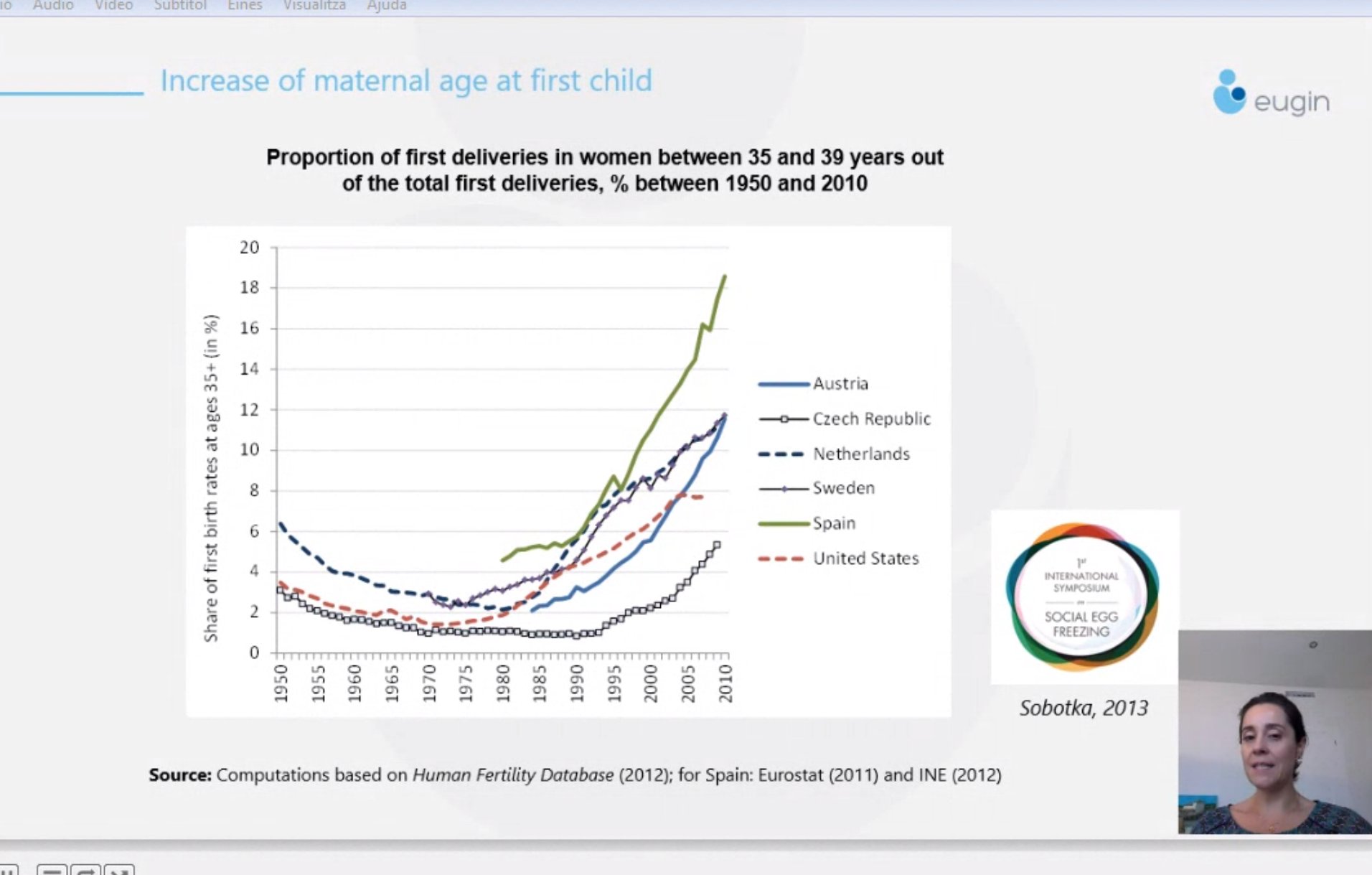 Parenthood in the 21st century

Dr. Tomáš Sobotka, from the Vienna Institute of Demography, analysed the demographic factors currently affecting birth rates and fertility. He also referred to the decline in the birth rate recorded in the decade following the economic crisis of 2008. In particular, during his talk Dr Sobotka was convinced that the covid-19 pandemic is going to cause a birth rate crisis.

In this vein, Dr. Rebecca Sear, from the London School of Hygiene & Tropical Medicine, discussed in her presentation how the family influences women’s fertility and how this varies depending on where in the world we happen to live.

The sessions by Dr Marc Güell, of the Universitat Pompeu Fabra, and Dr Giulia Cavaliere, of the University of Lancaster, examined the use of human genetic editing for the treatment of severe medical illnesses from a technological and ethical perspective, respectively.

Finally, Dr Maarten Larmuseau of the KU Leuven in Belgium and Dr Marilyn Crawshaw of York University each addressed aspects of genetic identity and parenthood.

With the aim of strengthening the links between Eugin and the Universidat Pompeu Fabra, the Eugin-UPF Chair in Assisted Human Reproduction was created in December 2019 to promote research, the dissemination of knowledge and investigative projects.

The initiatives carried out by the Chair in terms of research include the definition and development of research lines, the promotion of joint doctoral theses as well as cooperation in the obtaining of projects.

You can find more information about the Symposium on the following link:

What stage of the treatment are you at?

When you discover that you are going through menopause at the age of 32, the first thing you think is that you have lost your chance to be a mother forever. The first time I heard about oocyte donation I was a bit sceptical, but it’s certainly true that seeing is believing. And now every time I see Martina’s face, I know that deciding on Eugin was the best decision I ever made.

Resolve all your doubts with our assisted reproduction specialists